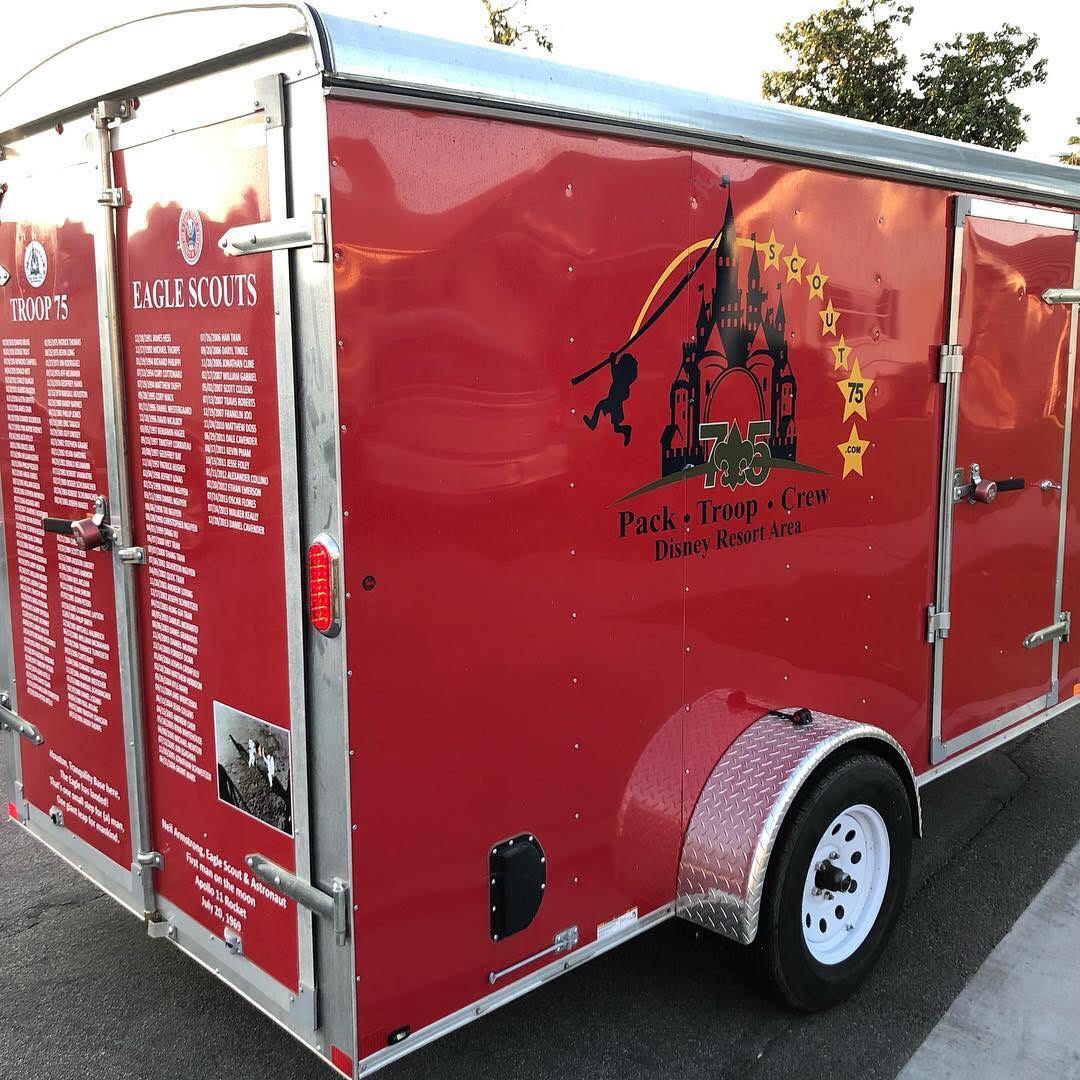 Several years ago, our blue Troop 75 trailer was stolen off the premises.  It was returned, but the damage was done.  Now we have finally replaced it with the Noble Knights - Red Knight Trailer.  6X12, and slightly smaller than the last one by design.  It is easier to pull, maneuver, and safer since the sides are about a foot more narrow.  It is big enough to haul all we need, yet small enough we almost forget we are towing it.  With bright, cherry red paint you can't miss it on its next adventure.  On the back under the 134 Eagle Scouts is an image of the most famous Eagle Scout ever, some guy named Neil Armstrong.  Along with his partner Buzz Aldrin.

On the lower left door we emblazoned the first words spoken on the moon.

We thought it would be a cool idea to put this on the back of the trailer.  What makes it even more cool is we actually met Buzz Aldrin, the second man on the moon in high school.  So we have a personal connection to it.

Troop 75 Trailer from 2005: Before and after it was taken

Our original plan to paint and refurbish it

How we hope new trailer will look
In January, 2011 thieves went on to the church grounds of First Presbyterian Church of Garden Grove, CA and stole our trailer.  Read the story from abc news.  The trailer contained about $5,000 worth of equipment.  Fortunately due to the public awareness and outcry that someone would steal from the Boy Scouts, the trailer was returned.  Unfortunately, between the time it was stolen and returned, the perpetrators had begun the process of trying to hide the trailer's identity.  They scraped off the entire paint job and all the logos, emblems, sponsors, and names of over 134 Eagle Scouts that have been produced by Troop 75.

Pack 75, Troop 75, and Crew 75  have joined forces to restore the damaged trailer.  A new logo encompassing both the pack, troop, and crew was developed.  The pack, troop, and crew had the plan to restore the trailer to its original glory.  As part of the process the 134 Eagle Scout names that were on the back doors will be put back on.  In addition the names of the Eagle Scouts that have reached this level since the trailer was taken will be put on as well.  On the front we will place the names of any Venturing Crew 75 members that achieve the Venturing Crew Summit Award, the highest level in this co-ed program for 14 to 21 year olds.

The damage and wear and tear of the elements made it so the cost to fix the trailer was no longer worth it.  The trailer was sold off, and the funds were finally available to replace it.  This was a venture that was nearly 8 years in the making.  We never thought it would take so long to repair/replace. Something always came up, and we could not get enough funds to complete the project.

​Thankfully, after that long adventure the new trailer has arrived from Bakersfield.  It's perfect!  Red to match our Class B shirts, and our Troop and Crew neckerchiefs.  The new castle logo encompassing the blue and gold of Cub Scouts, the red and gold of the Boy Scouts, and the green, and grey of the Venturing Crew.  All 134 Eagle Scout names have been added on to the back doors.  It has been retrofitted with the finest available locks in the industry, and under camera surveillance 24/7.  It's debut activity was Camporee on April 26 to 28, 2019.  It sure was nice to have it haul everyone's equipment back to our home base.  It's first big public viewing will be at the Garden Grove Strawberry Festival Parade May 25, 2019.  We want to invite all the former Eagle Scouts to march with us, as well as parents, boosters, and supporters of both the Pack, Troop, and Crew..

In the future we plan on using the trailer more often and take it to elementary schools for recruitment, community service, and camping. Our first trailer recruitment event is Wednesday, May 15, 2019.