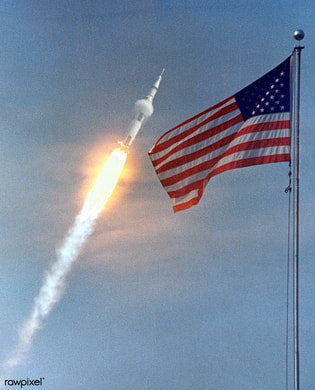 In the late 1960's the battle for space supremacy was at an all time high.  The United States was  neck to neck with Russia on who would get a man to the moon first.  President, and former Boy Scout, John F. Kennedy challenged America.  He said, "We choose to go to the moon. We choose to go to the moon in this decade and do the other things, not because they are easy, but because they are hard, because that goal will serve to organize and measure the best of our energies and skills, because that challenge is one that we are willing to accept, one we are unwilling to postpone, and one which we intend to win, and the others, too.  ​America did accept that challenge, and as the world knows we won the fight for space supremacy.  On July 20, 1969 America landed the first ever man on the moon in Neil Armstrong.  His fellow astronaut Buzz Aldrin seconds behind him.  They both can be seen planting the first American flag on the moon.

July 20, 2019 marks the 50th Anniversary of this great achievement.  At Scout 75 we have added those most famous words uttered by Neil Armstrong to the back of our Red Knight Trailer.  We have the picture of him and Buzz Aldrin planting the American flag.  We met Buzz Aldrin once.  It's a our connection to the stars, as Scout 75 is a Scouts International unit.  We do this to honor this great achievement, and to remind our scouts keep their feet firmly planted on the ground, and reach for the stars.  The most famous Eagle Scout rides along with the names of Troop 75's other 134 Eagle Scouts.

A Giant Leap For Mankind 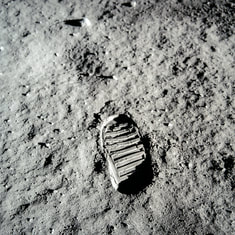 The bottom left door has the first words spoken on the moon.

In case you're wondering:
Houston refers to the NASA base in Houston, Texas.
Tranquility Base refers to the name of where the astronauts landed on the moon.
Eagle refers to the name of their ship that touched down on the surface.
Neil Armstrong claims he said "That's one giant step for a man, but the interference blurred it out, and Houston only heard,
"That's one giant step for mankind."
Through digital advances it has been shown that Neil Armstrong did say the A.
​We added it in parentheses since he said it, but it was not properly heard.

Scouts who want to learn more about astronomy and space exploration can work on earning these two merit badges.
​NEVER FEAR, 75 IS HERE!
Powered by